These days, a big part of any author’s job is the sales and marketing of their book. Not only do you have to pen an interesting and relevant literary work of art, but you also have to be equipped to peddle it on social media sites, and pitch it to more traditional media vendors such as radio, magazines, and TV. In short, you have to be willing to sell yourself. For me, because I was trained as a counselor where self-promotion is discouraged, even frowned upon by academia, it’s a concept I’ve resisted. It’s felt ingenious and even unprofessional to “toot my own horn.” Especially about such a sensitive and personal subject-my own daughter’s suicide. But the reality of the competitive book publishing business is that books don’t sell themselves anymore, so self-promotion is a necessary evil.

In my effort to spread the word about my new book, “Once The Storm Is Over: From Grieving to Healing After the Suicide of My Daughter,” I’ve been contacting suicide prevention and mental health organizations. As I talk with people across the US and even in other countries, I’m astounded by how many people tell me their own stories of how their life was forever altered by the suicide of a child, a loved one, or a friend. 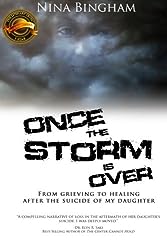 Recently I was invited to be the monthly featured blog story for an international suicide prevention organization. The editor of their blog had lost her son to suicide just a few years ago. She began by graciously acknowledging my loss, offering her condolences, and expressing her admiration of my work for suicide prevention. Of course, I responded in kind, because there’s just no way you can fail to say you’re sorry when someone has lost a child in this brutal way. When you’re a member of this special club, the Suicide Club, there is a certain formality that has to be observed before you can rush into business. All the members greet each other in this same way. It’s because death by suicide evokes a special kind of terror and sadness in each of us. We take a second and bow our heads to acknowledge the life-altering devastation. Kind of like when you say the pledge of allegiance-it’s a small sacred moment when you stop the business of your everyday life to remove your hat, quieting your heart in memorial. We become reverent when we hear about suicide because even on our worst days, even when we’re cursing our lives, somewhere deep inside, we know that life is sacred and deserves respect. It touches a very fundamental, instinctual law that we all know we’re not to cross, and most of us cannot imagine taking our own lives, or God forbid, one of our children dying in this way. It’s a reprehensible thought, is it not?

There’s a few things that the members of the Suicide Club would like you to know. First, it’s okay to talk about it with us. Every day, very hour, and when we’re first going through it-every single minute, we are thinking about it. It’s like the elephant in the room. So please, invite us to talk about it. We know the elephant is there, and if we’re not up to talking about it, we’ll let you know. Most days, we’d prefer to be given the chance to be understood and acknowledged by another human being who understands. Sometimes just a hug will suffice. Second, it’s not our fault. Research shows that nearly 90% of suicide completers had mental illnesses such as depression that drove them to it. We know it wasn’t our fault-most of us did everything we knew to do at the time. And if we are blaming ourselves, part of our process of healing is forgiving ourselves, and we will eventually get there. Thirdly and lastly, and most importantly, this is going to change us forever. We will never be the same person we once were, so don’t expect us to be. It will change us, and our lives will look a lot different after than before. Some changes will be for the worse (my fiancé tells me I don’t laugh as easily anymore), and some will be for the better (I’m now very tuned-in to others’ pain). Just remember that what we went through didn’t make us too fragile to be talked to, and it doesn’t mean we’re guilty. It means we looked soberly into the face of death. Once you have looked there…your soul needs time to rearrange itself. It needs long periods of silence and aloneness, it needs times of throwing rocks and shouting at God (without feeling bad about it), and it needs to scream inside until you finally go hoarse. That could take quite awhile. So if you’re not a member of The Suicide Club, be patient with those of us who are.

If you are a member of this dreadful club, I take my hat off to you, and bow my head in reverence for you. I hug you, and tell you from the bottom of my broken heart to yours: I know you did all you could, I know you did. And…I understand-I really do. 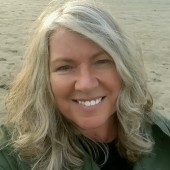 Nina Bingham is an Author, Life Coach, and Clinical Hypnotherapist. Inspiring, sincere and whole-hearted, she educates not only from her academic knowledge, but shares from her own hard-won life experience in a new and profound way. In private practice since 2003, she has treated individuals and couples with a wide variety of mental health issues. She is the author of 3 books of poetry and one recovery workbook, Never Enough. Her fifth book, Once The Storm Is Over: From Grieving to Healing After The Suicide of My Daughter is due out in February 2015. It's the autobiographical confession of a counselor who lost her teen daughter to suicide. What she learned about love and forgiveness changed her life forever. It will change yours, too.

Depression and Suicide in Children and Adolescents