Depression is one of the most common psychological problems in the world. It’s also on the increase. More people are seeking professional help because of depressive illnesses than ever before. This handout describes some of the more common symptoms of depression and suggests ways to combat them. These symptoms can be both cognitive (what we think) and physiological (physical changes in the body). It’s important to tackle both sets of symptoms in order to successfully overcome depression.

Many depressed people can actually feel a change in their bodies. For some it is a churning feeling, particularly in agitated depression. Others experience a sensation of heaviness with lethargy and even physical pain. Some have difficulty digesting food.

Which is one reason for the appetite disturbance which is a very common feature of depressive illness. Others have difficulty sleeping.

One thing common to almost every form of depressive illness is treatability. The approach may vary depending upon the nature and severity of the illness but the prognosis is usually excellent – so long as the sufferers are prepared to take an active part in their own treatment. In fact most types of therapy are based upon the client’s own choices and participation. Even those which begin with little more than medication usually lead up to active client participation. The more the depressed person does to help themselves the greater the chances of continued success.

The cognitive or psychological symptoms of depression – what we think about are just as important as the physiological ones. Some people believe that psychological symptoms are more important but this is not necessarily true. After all there is no such thing as the ‘mind/body split’. Actually they are one and the same –just two sides of the same coin. That’s why we need to consider both.

Depressed people tend to think in a particular way. They tell themselves the same sort of gloomy, pessimistic things over and over again. This is what psychologists call negative thinking. After a while this pattern of thinking becomes a habit. When that happens it is described as automatic negative thinking. This habit formation is one of the most damaging aspects of depression as it locks the sufferer into a downward spiral which drags them deeper and deeper into despair. Later we’ll consider ways of breaking the cycle but for now It’s enough simply to recognize some of the more common thought patterns and the effect they have on depressive behavior.

There are many more depressive thoughts – too many to cover in this handout. However people who recognize themselves and their own style of thinking in the paragraphs above may well benefit from the wide range of ‘talking cures’ available.

Reactive Depression, as the name implies, is a reaction to circumstances or life events. It’s usually responsive to counseling or psychotherapy but may require drug treatment in more severe cases. Reactive depression is also known as adjustment disorder.

Endogenous depression is also known as Biological Depression and is generally considered to be genetic in origin. This type of depression is usually treated with medication in the first instance although cognitive and lifestyle interventions still have a major role to play.

Psychotic Depression is one of the most bewildering forms of depressive illness, both for the sufferer and for those around him or her. Psychotic people can be said to have lost touch with reality. That is to say they perceive the world in a radically different way from everyone else. They may be hallucinated (hearing voices, seeing visions) or suffer from a range of thought disorders which cause them to completely misinterpret events. Often psychotically depressed people become paranoid or come to believe that their thoughts are not their own (thought insertion) or that others can ‘hear’ their thoughts (thought broadcasting).

Other symptoms of Psychotic Depression include ideas of reference (the belief that everyday things have some special significance for them), nihilistic delusions (in which the sufferer believes that part of their body is changing or in some cases that they are actually dead). This is far from an exhaustive list of psychotic symptoms.

Once again this type of depression is best treated with medication although studies have shown that training in skills such as assertiveness or anxiety management make relapse much less likely.

Manic depression or Bi-Polar Affective Disorder is characterized by extremes of mood. Sufferers experience absolute highs (mania) and absolute lows (depression). Treatment options are similar here as for Psychotic Depression although the medication prescribed may vary. Interestingly some psychiatrists consider both Psychotic Depression and Bi-Polar Affective Disorder to be different presentations of exactly the same illness. As with so much in psychiatry today the jury’s still out on that one.

The Chemistry of Depression

The best way to understand the chemistry of depression would be a medical qualification followed by years of specialist study in psychiatry – or pharmacological training. However – here are some useful basics.

The brain is awash with chemicals called neurotransmitters. These chemicals are used to carry electrical signals through the nerves, which is how human beings think and feel. We need adequate amounts of neurotransmitters in the correct balance in order to function properly.

There are several neurotransmitters which affect mood but here we will consider only one. This neurotransmitter is called serotonin. Put simply the more serotonin in the brain the higher a person’s mood. If the level of serotonin drops we become depressed. That’s why many of the drugs prescribed to treat depression have an effect on the serotonin level.

Serotonin also affects sleep which is why depressed people tend to sleep poorly, often finding it difficult to drop off in the first place, waking repeatedly through the night or sleeping solidly but for only a short time. It’s often to do with serotonin.

Incidentally, that’s why people who drink a lot of alcohol tend to be depressed and often have trouble sleeping. It’s because alcohol destroys serotonin. So much for cheering ourselves up with a few drinks. We may find it easy enough to drop off to sleep when we’re drunk but drink regularly and you’ll soon find yourself waking up in the middle of the night. Then you’re on the slippery slope to depression. And you thought the advice to avoid mixing alcohol with anti-depressants was just doctors being mean! If you want the tablets to work lay off the booze.

What Can You Do?

The following suggestions are designed to combat the physiology of depression as well as its psychology. Try as many or as few of these as you like – it really is up to you. Just remember that the more of these you practice the greater your chances of recovery. The choice is yours:

I hope that this brief overview of depression has been useful. As you can appreciate there is much, much more to learn but these are the basics. The information here won’t get you a degree in medicine but it will help you overcome depression – so long as you apply it. Remember however, that this is not intended as a substitute for qualified medical help. If you need that sort of help then my advice is to go and get it – NOW! 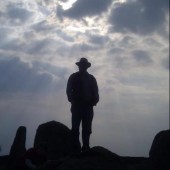 The Many Faces Of Stress