I have my own blog called Depression For Teens where I talk about mental health illnesses such as depression and ways to raise awareness as well as various other things so be sure to take a look!

Raise Mental Health Awareness: One in four people will experience a mental health problem in any given year.

Those who suffer from mental health rarely talk about it openly because they are scared of being judged and looked down upon. Society has made mental health illnesses seem like a bad thing which is why people hide having them. This is why you might be thinking “if mental health illnesses are so common then why don’t I know anyone with any?”, trust me, the odds are you do – you just don’t know about it.

Here are some facts on mental health:

Why You Should Raise Mental Health Awareness

I’m going to tell you a short story about a friend of mine. Maybe a real life example will help show you that what I am saying is indeed true.

I always had this one friend who I would openly talk to about how I feel. I felt she understood and cared. Little did I know that the person who helped me the most was fighting her own battle with depression.

Eventually, I put together some pieces and figured it out. Nobody, except me, actually knew about the battle she was facing. So I proceeded to ask her why she never told anyone and why she’s fighting it all alone. Her answer was “People would judge and look down on me”.

That just proves my point, and it hurt me when I heard her answer. We help each other now, and I hope nobody else has to suffer alone.

How You Can Raise Mental Health Awareness

So I’m going to assume you want to help out now. Here are 5 ways you can do so. These 5 are actually from an E-Book I wrote for my website. The E-Book goes into all the details of these 5 points and gives you examples for raising mental health awareness so if you are interested then be sure to check it out.

Here are some mental health charities that you can donate to. These sites also have a lot of information related to mental health so be sure to check out what they have to offer!

Below are three popular places where people have shared their mental health stories.

There’s nothing to be ashamed of when sharing your story. You also should not feel pressured into sharing stuff you don’t want to – it’s up to you. After sharing your story, you can even go a step further and share it on your social media! 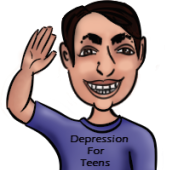 I’m Sam and I have a blog called Depression For Teens where I talk about mental health, mainly depression, and ways to raise mental health awareness. Be sure to check out the blog and catch me on twitter @depression_911 if you ever need some support or just a friend to talk to!

Steps At Managing Mental Illness As A Parent

How a Mental Health Diagnosis Can Give Teens Hope

Are you Stymied by Stigmas?