When our mother was on her deathbed, we decided to go to South Korea together. With four children and a part time job you didn’t have the funds necessary to go. I told you that I’d take care of it. A good friend of mine suggested that we do an online fundraiser, and I allowed him to coordinate it.

I didn’t have pride about it after he explained that he and the rest of my friends wanted to help somehow. They wanted a way to help ease the pain, they wanted to do something. So I allowed the fundraiser and within a week, we had enough money to pay for a couple of plane tickets to Incheon.

Carrying Your Grief: “What you didn’t know is that I’ve felt abandoned by my family multiple times, so what was one more?”

Shortly before we were to leave, you called me and told me that you couldn’t go. You didn’t want to see our mother in such a state. You wanted to remember her being plump and funny and the caring grandmother to your kids. I pleaded with you a little, I cajoled you a little. But you were adamant in your fear and anxiety, so I swallowed my disappointment and anger and I told you that it was okay, that I’d take care of everything.

What you didn’t know is this: I felt abandoned. What you didn’t know is that I’ve felt abandoned by my family multiple times, so what was one more? I was used to it. So I took a deep breath and bought a ticket to Incheon. The flight itself wasn’t without complications, including lost luggage, but I was in such “take care of business mode” that I just bulled past all problems.

It wasn’t until I was on board and could relax a little that I was able to let my guard down. Of all things, the tears came to me as I watched Pixar’s animated movie Inside Out. The depiction of the character Sadness, and of Riley’s complex emotional issues, tugged at my heartstrings and I let a few tears land on my cheeks. Fortunately for me, at that time the cabin was dark. No one could see me, I didn’t have to tell my story to some well-meaning stranger.

After landing, I did all the things that the eldest son in a Korean family must do. I went to the hospital where I greeted our uncles and aunts and mom’s great love, Mr. Choi. I saw her lying on the hospital bed, her body a ruin. You were right to have anxiety at the thought of seeing her, I could barely recognize what was left of her. Her skin had become the color of cafe au lait, a result of her ruined kidneys. Her hair had all fallen out, what was left was stark white, her teeth appeared almost broken. The worst was when they took the cotton balls off of her eyes, they were jellied and ruined.

I let out a cry of pain then, something so deep inside of me that when it came out, it sounded like something an animal would vocalize. Mr. Choi and I collapsed on her body, the hot tears streaming down our faces and necks. I told mom that it was okay for her to go, I held her hand and told her to walk with a god that I don’t really believe in. After that, tears escaped her eyes. My therapist later told me that there was a very high chance that even in her unconscious state, she could hear me. The tears may have been of gratitude or relief.

She died a couple of hours later.

While you were home worrying about me, I picked out mom’s shrine, took care of the paperwork, and when our eldest cousin told me that I had to stay in a mourning chamber for 3 days and greet visitors, I didn’t protest. I just did the best I could. There was a lot of bowing and eating miyeok guk, Korean seaweed soup. It was delicious and tasted like home. I’m sorry you missed it.

We went to the crematorium, and I was faintly surprised that the business of death was almost banal. While we waited, I took a nap.  We ate more soup and waited our turn. I sat on a bench and watched everyone’s story unfold – there were important people, and ordinary people and we were all the same: waiting to watch our loved one’s go up in flame, ever one of us different, but with the same ending, in ash and tears.

When I got home, I was physically and emotionally exhausted. The day after I got home I looked outside my bedroom window and noticed that my car was gone. It had been stolen. I almost laughed at the absurdity of it all. Almost. Instead, I called the cops, and did all the things one must do after that happens, and truth be told? I was glad to have something to work on. I was glad to have the distraction.

I needed that in my life, and my friends and family noticed. My concentration was all over the place, as were my emotions. Finally, getting over my own inertia and resistance, I asked my wife for her friend, the therapist’s information and made an appointment.

In my third session with her, she asked me on a scale of 1-10 how badly I felt. I said to some surprise, “A four. Maybe a four and a half.” We had just gone over the narration of what had happened: the difficult flight, the hospital visit, the mourning chamber, the crematorium, and the flight home. Where once I would have been overwhelmed by emotion recalling mom’s body in the hospital, now I was able to get a hold of myself.

With help the raw wounds of my emotional state were starting to scab over, starting to heal. It was still unpleasant to poke at, but it wasn’t an open wound anymore.

Sister, you texted me recently and asked if I had gone to therapy. You wondered if I had talked about you (I had, briefly). I know you’re like me, a little skeptical about therapy. But I urge you to go see someone. Get recommendations from your church and friends and family and go see someone. The therapist can’t solve your problems, but they can talk you through your healing, they can give you the methods to get peace of mind.

If nothing else, trust me – your big brother just wants you to be happy and whole. 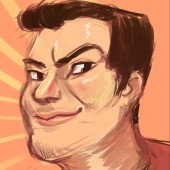 I'm a nascent writer, stepdad, husband and podcaster who lives in the wilds of Tacoma, WA. You can find me over at allcomicsconsidered.com where I talk about comic book justice, and social justice, respectively.

What to Do After You Lose a Loved One

A Healthy Mind: Dealing with the Emotional Side of Hearing Loss