The Ayurvedic approach towards attention deficit hyperactivity disorder (ADHD) explains ADHD as a mental disorder caused by imbalances in doshas. Ayurveda classifies mental illness under Kaumarabhria such as Attention deficit hyperactivity disorder, Bipolar disorder, and Autism. Ayurvedic approach to treat Attention deficit hyperactivity disorder is to enhance the dhi, dhriti and smriti resulting into increased mental coordination. Moreover, ADHD is a pediatric disease but also have reported in adults. Taking consideration of Ayurvedic approach the use of herbs for the treatment of mental illness are safe, effectively balance the vitiated doshas, promotes health habits and  strengthen immunity. It is generally observed in the children but may be reported in adults if it is not diagnosed well.

The symptoms of ADHD are:

The Ayurvedic Approach considers mental illnesses as an imbalance of Doshas.

Improving mental performance by herbal therapy is highly effective in improving total reaction time without any adverse effect. The Ayurvedic approach relies on the mechanism to regulate the mental performances which involves;

To develop the overall personality and good future of a children, it requires efficient learning capabilities. For that purpose a healthy mental statues is required which is influenced by the mental disorders. The use of natural herbs, which are characterized a Rasayana in Ayurveda promote the mental health and cognition. Attention deficit hyperactivity (ADHD) is a neurobehavioral developmental disorder and generally observed in the children below of seven years.

The Ayurvedic approach to treat ADHD is to use herbs, mediation and yoga. The Ayurvedic text emphasizes the use of Rasayana herbs to correct the doshas present in the brain such as tarpaka kapha, sadhaka pitta, and prana vayu.

The mechanism of actions are:

The basis of treatment:

There are two types of approach to treat the ADHD, which includes herbs that pacifies all types of organs, dhatus and srota of the body. These herbs pacifies the vitiated Vata dosha. These herbs effectively correct the body metabolism and maintain the proper functioning of all organs. Examples of herbs are Ashwagandha (Withania somnifera), Shanka pushpi (Convolvulus pluricaulis), Jatamansi (Nardostachys jatamansi). The other class of herbs are prescribed for correcting the mental disorder and effectively rejuvenate the brain. They are classified as Medhya Rasayan, which means they provide maximum nutrition to the brain, enhances dhi, dhriti, and smriti and improve coordination among neural complex and various mental factors. Examples of Medhya Rasayan herbs are, Vacha (Acorus calamus), and Brahmi (Bacopa monnieri).

Ashwagandha (Withania somnifera): It is a Rasayan and acts as a general health tonic to the body. It corrects body metabolism and rejuvenate the body. It the best stress buster and improves the coordination among neurons. It acts as a nerve tonic and enhances the mental stamina. It is the natural rejuvenator and maintains the proper nourishment of tissues particularly muscles and bones. It effectively corrects the debilitating conditions, stress, fatigue, anxiety, palpitation, aging and nervous breakdown. It strengthens the muscles and enhances the physical stamina. In ADHD, it strengthens the brain and corrects the nervous breakdown. Thus keep the brain calm and active.

Jatamansi (Nardostachys jatamansi): It is well known brain tonic and imparts a sense of calm and peace to the brain. It reduces burning sensation, inflammation and improves skin texture. It regularizes the digestion system and corrects the metabolism. It effectively treats mental retardation and mental disorders.  It improves the circulation, cleansing process and absorption of essential nutrients. It relieves from vertigo, dizziness and fever. It reduces hyperactivity, restlessness and aggressiveness in children. Thus, it the best Ayurvedic approach to treat Attention deficit hyperactivity disorder (ADHD).

Vacha (Acorus calamus): It is well known for the treatment of mental and neural disorders. It alleviates Vata and Kapha. In Ayurveda it has been described as nervine tonic and anti-stammering herb. It contains active and potent psycho-pharmacological molecules which improves memory and learning capabilities. It has been used as anti-epileptic and anti-hysteric herbs since centuries. It is also carminative, digestive, diuretic and sedative. Thus, it is a very potent herb for depression and anxiety. It is also very helpful in hypertension, anorexia, gas formation and liver disorders. It is very effective to treat the forgetfulness and inattention disorder of attention deficit hyperactivity disorder.

Brahmi (Bacopa monnieri): Brahmi has been traditionally used for its medicinal properties since centuries. The herbal extracts of Brahmi contains various active molecules like Alkaloids, saponins, sterol, betulic acid, stimastorol, bacoside, herpestine etc. the herbal extract oil Brahmi has several benefits. It acts as a Memory booster in which it has significant role in enhancing memory, learning capabilities and alertness. It contains Antioxidant to scavenge the free radicals, who attacks on the various tissues and cells of the body. It is neuro-protective and protect the nerves degeneration, known as neuro degeneration. It effectively treats Depression and epilepsy and it has been observed that Brahmi treats depression equal to commercially available anti-depressant drugs. The herbal extract also has shown positive results to cure epilepsy. 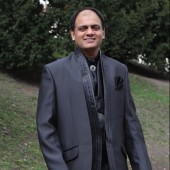 Dr. Vikram Chauhan is an Ayurvedic practitioner based in Mohali, India. He is spreading the knowledge of ancient healing treatment Ayurveda, not only in India but also abroad. Dr. Vikram has conducted many seminar and workshop on herbal treatment in various nations.